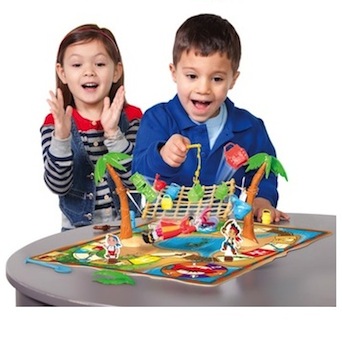 Captain Hook is snoozing in his hammock, surrounded by the entire treasure he’s nabbed from Jake and his pirate crew. Spin the spinner to select your challenge, then use the sword, the fishing pole, or the shovel to pluck a piece of treasure! But steady as she goes–you want to grab the loot without sending Hook tumbling into the water where Tick Tock Croc awaits. This imaginative, play-packed game is sure to be a hit with clever little pirates. 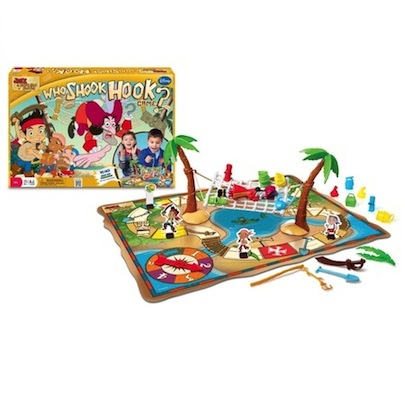 Take back the treasure.
View larger

An exciting game of skill and suspense

Sure to be a hit with clever little pirates, this game keeps everyone on their toes. Preschoolers should use their fine motor skills to carefully remove the colorful treasures from Captain Hook’s hammock even as he slumbers. But watch out, one false move sends everything tumbling down! A fun early preschool game for up to 4 players so that it will have kids cheering and celebrating each time they successfully retrieve a treasure.
You should remove the most treasures from Captain Hook’s hammock without waking him up, to win. On your turn, spin the spinner and move you’re character the number of spaces clockwise. Once on the space, you’re going to either get to take away one treasure with a tool of your choice, remove a treasure that may be the same color as the space, or remove a treasure with the tool on the space. If you spin the Broken Bridge, any player with their mover on a bridge space loses one treasure to Tick Tock Croc. If you cause Captain Hook to fall out of the hammock, the game is over and the player with the most treasures wins.